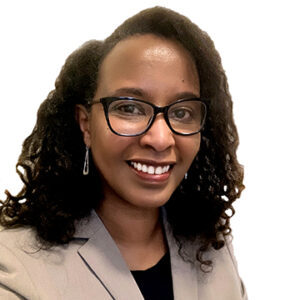 We caught up with one of the women who makes ISA’s world go round: Dr. Fenot Aklog is our director of monitoring, evaluation, and research. She recently joined ISA after previously working alongside it while at Teachers College and Columbia University’s National Center for Restructuring Education, Schools & Teaching (NCREST).

Do you remember a teacher who had a significant impact on you – and who was it and what was that impact?

Fenot: Her name was Mary-Alice Daniels, and she was my 12th grade English teacher. She was eccentric, she was fun, she was quirky; and with me, she saw the potential of a very shy recent immigrant from Ethiopia who (weirdly, from her perspective, I’m sure) was actually really good at English. One of her assignments was for us to write an original poem. The poem I wrote was dark and existential: about the then brutal military dictatorship in Ethiopia. Not exactly your typical teenage writing! She said something like, “I don’t understand you or the world you come from, but what I do understand is that you are an amazing writer. So we are going to get your poem published. We are going to submit your poem as part of your college application essay.” She even wrote my letter of recommendation. Through all of this, she guided and supported me; I thought it was so weird that she said, “We are going to do this.” It was such an overt way of showing that she really cared; she didn’t know me from Adam, but she really cared about me and my future. She really gave me a confidence boost. It was a confidence that sustained me through college. I will never forget her.

What was your path to ISA like – what did you do before?

Fenot: Prior to coming to ISA, I worked at NCREST at Teachers College, Columbia University, and ISA was a “client”; NCREST was a thought partner going back to 2000, helped ISA develop the whole school reform model and approach, and served as an implementation partner. So I actually worked with ISA before coming to ISA! It was a natural transition, even after a 20-year-long path. Seeing ISA move from after-school to a whole-school reform model and seeing the birth of that is sort of full circle for me.

Over your years of experience, what can you say is one memorable moment that propelled you toward the work you do today?

Fenot: There were so many, but the one that stands out to me was when I was a doctoral student and was working as an assistant at a research center. I had the opportunity to shadow a high school student for a day as a method for collecting data to inform the implementation of a school transformation model at a high school that was under-resourced and low-performing. I was assigned to shadow this absolutely delightful student. She was a person of color; she was energetic, charismatic, popular, the perfect host – we became buddies. Over the course of that school day, she shared with me a lot of her ambitions. I went to classes with her and observed her; she was very engaged and persistent and exuded a certain thirst for knowledge. While I saw that day a lot of things in the school that were inspiring, I also saw things that were heartbreaking. The school didn’t have a cafeteria, for example, so my student host ate a bag of chips for lunch. It didn’t have a library or a gym, which isn’t unusual for an under-resourced school. I observed classroom instruction, which varied a great deal. Some teachers were very masterful in their practice given that they were working under conditions of a school that was under-resourced, and others did not match my student host’s level of enthusiasm and engagement. Others participated in blatant racial microaggressions. It wasn’t like I wasn’t aware or didn’t understand the ways in which schools can and do reproduce society’s stratifications and inequities, but it was the first time I came to understand what that looks like from the point of view of a young person – and a student of color. That was profoundly transformative for me – a moment that I can point to as lighting the fire under me to really pursue and apply education research to the K-12 space and try to contribute to possible solutions to this, if I could.

Why is the work that ISA does important?

Fenot: From my perspective now as the director for monitoring, evaluation and research, I would say its work is important first and foremost because ISA uses research-based strategies to work with and engage with educators to enact their vision – the vision they have for transforming their schools, the classroom learning environment, the instructional practices – so that all students can succeed and thrive. This approach has undergone two rigorous and independent evaluations that have shown that the ISA approach has significant positive impact on student outcomes. ISA has been identified by the U.S. Department of Education as being an evidence-based approach to whole school reform.

What excites you about your current work at ISA?

Fenot: Being part of the ISA team – it’s composed of such a talented, smart, and fun bunch of folks, and I just learn so much from them every day. In terms of the monitoring and research work, it’s really been great to collaborate with ETS researchers to build this monitoring, research, and evaluation service. We have a vision of what this is going to look like, which will include supporting the collection of data for ISA’s portfolio of services, but we also want to build stand-alone versions of these services, which would include creating tools and processes for conducting research for districts and schools such as our school climate and culture assessment, plus potentially social and emotional learning audits and curriculum audits.

You meet someone who knows nothing about ISA. What would you highlight for that person?

Fenot: ISA doesn’t have a prepackaged or one-size-fits-all approach to supporting K-12 school transformation. [ISA’s services] are customized to the particular needs of a school, and at its foundation the ISA approach is really about establishing relationships based on trust. There are certain research-based principles that guide it, but at its core it’s about…trust. If we don’t have that, nothing we do is going to work.

What one important innovation will come out of schools and districts after the pandemic?

Fenot: The jury’s still out on this, but I think one of the things is the normalization of online teaching and learning. I doubt it will ever replace in-person teaching, but the reality is that schools (and ISA, for that matter) were forced to respond and adapt to online coaching and teaching, and I think on some level that’s here to stay. From that, whether there will be innovations – I hope so (I don’t know what those would be), but I’m sure that there are ways that schools have become innovative because of it. I think it’s a positive opportunity that has come out of a pandemic.

Fenot: Ben & Jerry’s Chunky Monkey. I have to literally not buy it anymore; it’s that good.